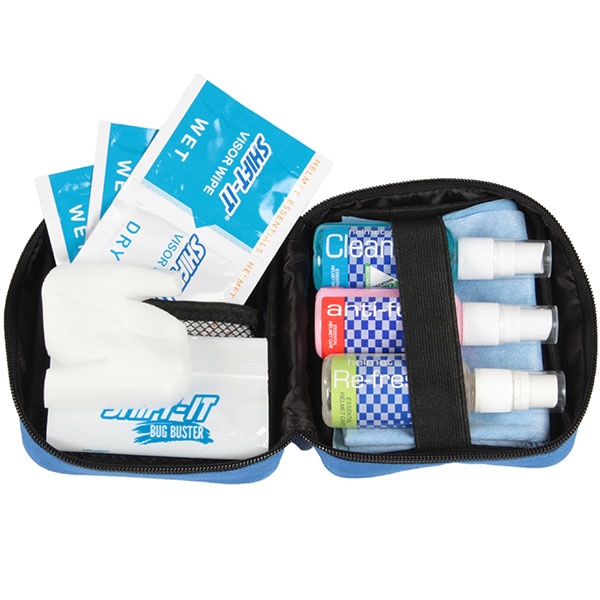 When I received this the elastic inside was already broken - but not the end of the world. The helmet refresher is nice. The visor and helmet cleaner - great at cleaning the visor, not so good at cleaning the helmet. The anti fog is absolutely rubbish. I haven't used the sponge yet. The 3 cloths are ok - but are only good for one or two uses. So to summarise, you're paying £15 for a pouch, some wipes that will need replacing after use, and some spray. In hindsight I'd have been better off buying a pack of 100 wipes and carrying 5 at a time in a pocket.

Everything you will require to see where you are going, small enough to take away and well packed.

This item was perfect for what I needed, its small and compact and has everything you need to keep your helmet clean. The sponge has its own bag so you can keep it damp with the visor cleaner having added water repellant also. For the price it perfect for keeping under your seat if you have the room.

Great value, good quality, really cleans up helmet and visors. Will buy again when I run out

Great kit, everything you need in a very handy case.

Bought on advice of good ratings, other half loves it! Great gift for a biker.

Just the right size to carry on a trip.

Excellent kit. Good contents and good value. Now safely packed in my panniers ready for my trip to France / Germany.

A well packaged kit in a nice wee case that will fit in either the luggage or, depending on your ride, somewhere else on the bike! Will come in really handy when touring to keep your helmet looking and smelling good! No more nasty stale sweat odours!

Bought as a Christmas present for my other half who commutes a lot on the bike. He loves it, says it's really useful. Small so doesn't take up any room.

The Shift-It Travel Pack contains everything a rider or pillion will need to maintain safe and clear vision whether the journey entails crossing a town or an entire continent. Packed in malleable Polyester & PVC sturdy zipped pouch, it's designed to fit in the smallest space yet containing enough cleaning and rejuvenating power to keep any helmet in showroom condition throughout any journey.
Manufacturer

In 1994 Shift-It became the first company in the UK, and possibly the world, to produce a product specifically designed to effectively clean motorcycle helmets and visors. It was developed after one of the directors had been touring Europe in a hot summer when he was having the usual problems with insects and general road grime collecting on his visor. On his return to England, he put an idea to the company's chemists - to produce a product that could be used to quickly and efficiently clean all types of helmets and visors without scratching or smearing. Considering the complexity of modern helmets - including the use of polycarbonate, carbon fibre, kevlar, fibreglass and the combinations of these and other composites - it was no small task. After several months of trials and tests, they produced the product known today as Shift-It Helmet & Visor Cleaner.

See all Shift It products…
Questions and Answers