The build quality of this helmet is excellent, you can feel it's made of decent materials the second you pick it up. It's a fairly quiet helmet, much quieter than my old LS2, but I still wear earplugs to take the edge off. I'd say this is definitely the tightest initial fit I've ever had, but it has bedded in quickly and now fits like a glove.

Brilliant helmet for all weathers, easy access for built in sun visor. Love the satin finish too. 10/10 would recommend.

A great value helmet with a couple of minor fails

The i70 replaces the IS-17, and has several design changes. I owned an IS-17 for 3 years of heavy use, and whilst it was a good lid for the price, it had a few failings I hoped would be resolved by the i70. The top ventilation wasn't great on the old model and the spectacles channel a bit tight, but my biggest complaints were the lack of pockets for comms speakers and the poor mechanism for the integral sun visor. With the i70, the sun visor mechanism has been completely changed, no more relying on a spring return (which inevitably failed after only a few months of use). This, I reckon, is the biggest improvement, and the positioning of the lever on the side of the lid also makes it that little bit easier. Top ventilation has been noticeably improved, although it's a shame that you have to hunt for two sliders, instead of one, while riding to open/close them. Chin ventilation has also been changed, but this is where the i70 isn't as good as the IS-17. The control is easier to use, but I find that it keeps randomly closing while I am riding. Perhaps I am accidentally hitting the control when I open my visor, in which case the slider needs to be stiffened up a little. I also find that the visor is more prone to misting up when moving slowly, even with the included pinlock installed, so the airflow to the visor isn't as good as it was on the IS-17 for me. In slow moving traffic I always need to open the visor to its first detent to overcome this. The detents on the i70 visor are supposed to have been improved to make them more positive, allowing you to ride with the visor cracked open to the first notch. However, I find that as soon as I go much beyond 30mph, the visor snaps shut, so this is a bit of a fail. Comfort wise, the i70 is similar to the IS-17, but considerably improved by the inclusion of recessed pockets for comms speakers. The quality is better than you would expect for a sub £200 lid, and the wider glasses groove is excellent. I like the graphics on the design I chose, and the orange reflectors are effective, without being over the top. Weight-wise, the i70 is fractionally heavier than the IS17, but nothing that you would notice. Overall, the i70 is a better lid than its predecessor and a good buy, but it needs more air flow getting to the visor to stop it misting, and the visor needs to be able to stay open on its first notch when riding at moderate speeds. 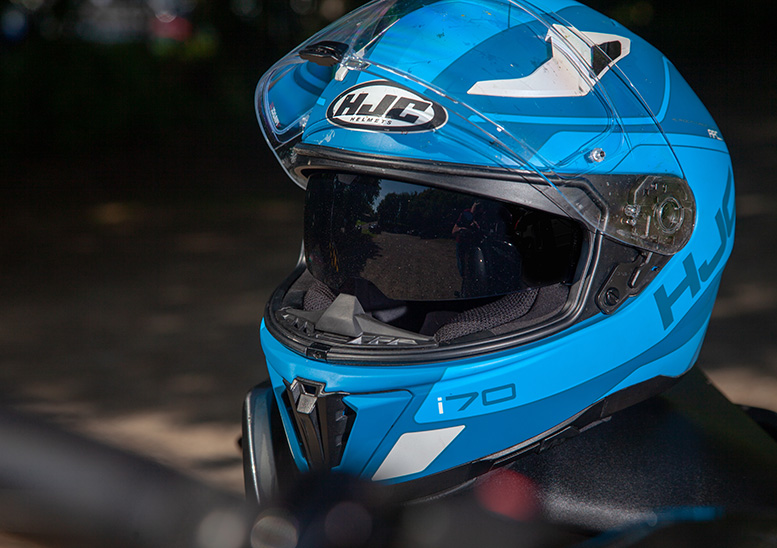 HJC have high hopes for the i70, which arrived in 2019 to replace the uber-popular IS-17 in the competitive mid-price...

All helmets are supplied with a clear visor as standard
The HJC i70 is constructed from a strong polycarbonate, ideal for touring and city riding. The i70's ventilation system is second to none with its five lower and upper vents, which ensures the heat and humidity is pushed out of the helmet. It also features a wide visor, drop down internal sun visor and Pinlock anti-fog lens. The i70 provides optimal vision and comfort for all rides and weather.
Product Specification Variants

HJC have been designing and manufacturing high quality protective helmets since the early 1950s. In 1971 the factory turned all of its attention to motorcycle helmets and set itself the simple goal of providing high quality, comfortable, and reasonably priced helmets to motorcyclists throughout the world. This goal came a step nearer during the 1990s when HJC became America's top selling motorcycle helmet - a position it's held ever since. Today HJC helmets are available in every corner of the globe and are, quite simply, the world's biggest helmet brand, producing more motorcycle helmets than any other marque. The range now encompasses the full spectrum of helmet types, with the widest selection of graphics, materials, and price points.

Browse all HJC Helmets, Browse all Motorcycle Helmets
Your Recently Viewed items
What people say about us