TCX, leading the way with an uncompromising focus on motorcycle boots

TCX as a brand was born out of the merger of two companies; Oxtar and Novation. Both companies were famed for their technological know-how, which ultimately helped to create what has become one of the most respected motorbike boot brands in the world. TCX inherited a history of innovations such as the Torsion Control System, and the Metatarsal Control System, which have subsequently both undergone modifications and improvements, helping to shape the boots in today's TCX collection. Both the racing, and touring ranges of bike boots, have specific technologies developed to maximise safety & comfort for the rider. The 'Woman Line' range shares the same technology as both the racing and touring lines, but has been developed specifically for the female foot. With a plethora of industry awards now under their belt, it's easy to see why TCX boots are one of the top selling boot brands on the market today.
Departments Featured Products 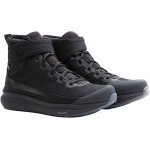 These are great for instructors

Very comfortable and practical. As an instructor it's very hard to find urban boots that can keep up. These are my second pair after using the first pair intensively for almost 2 years. The gortex isn't the best, but they do hold off the rain reasonably well 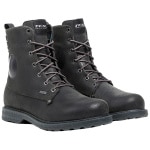 Maybe not stallion but the leather is quality and durable, comfy straight out of the box. These boots are a wide-ish fit but not overly so and the GoreTex lining is well done with no annoying seams or lumps to snag or rub against your feet or toes. They look and feel like ordinary boots, not motorcycle boots, which make them ideal for everyday use at work or when walking. Highly breathable and feel cool in warm weather, so much so that I feel the need to wear Merino wool socks to keep my feet feeling warm when temp's are lower especially when commuting early mornings. I'm pleased with their looks and fit, they are lightweight and comfy with toe, heel and ankle protection. Sizing is spot on and I feel that they come in at a reasonable price point for boots of this quality and spec. If you're in the market for a great looking pair of boots that feel really comfy, get these. Thanks to all at SBS, great bike store. 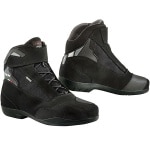 Fantastic pair of boots, well made, they feel and look like a quality product. Just finished a trip to Germany and France riding in +30 degree hear and the boots performed brilliantly. Then back to the UK and home in heavy rain, again excellent performance with no leaks, I would definitely recommend these boots. I picked these up at the Birmingham store, staff were brilliant and couldn't't have been more helpful.

Read more
PLEASE NOTE: The views and opinions expressed in the above reviews are solely those of the author and are not necessarily representative of the views of SPORTSBIKESHOP LTD.